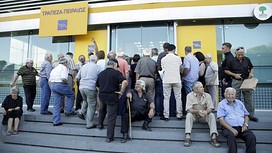 It is clear that Greece cannot repay its sovereign debt as it is now structured, despite a generous dose of reprofiling, (extend and pretend), already granted by the country’s public sector creditors in the eurozone. The International Monetary Fund has endorsed this view.

But how can one lower the debt burden on Greece, and yet at the same time be fair to other eurozone countries with debt burdens enlarged by the global financial crisis, such as Ireland; and fair also to the taxpayers in creditor countries, some of which may well be still poorer than the Greeks? There is, I believe, a way to do so.

This mechanism is to restructure most, or all, of such Greek debt into real gross domestic product bonds. These pay nothing so long as real per capita income is below its previous peak, but, as a quid pro quo, they pay a multiple, say twice, of any percentage increase in real per capita income as it rises beyond its prior peak level. The maturity would be long, say 40 years, but there would have to be a fixed maturity, since otherwise, in a growing economy the burden could eventually become excessive.