From bailout to ballot box 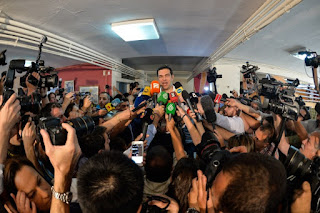 There is no shortage of cynical, mordant commentary among Greeks — on Twitter and in conversation — about the fact that the country is going back to the polls for the third time in eight months. There is mock enthusiasm about being the most democratic country in the world, many references to Prime Minister Alexis Tsipras’ talent for electioneering as opposed to governing, as well as suggestions that the contested date be put to a referendum.

Amidst all that, there are certain key features of the new election, to be held most likely on September 20, that need to be kept in mind.

First and foremost, the stakes will be much lower than in January. Back then, the challenger, Tsipras, vowed to tear up Greece’s bailout agreement and promised Greek voters everything from blocking privatization and erasing a large part of the public debt to repealing unpopular taxes, preventing further pension cuts and delivering a major boost to social spending. His victory inevitably led to a dramatic showdown with the country’s creditors, which led it to the brink of Grexit and back to recession.