Why a Grexit Must Be Avoided 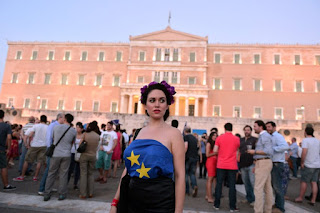 Anyone who opposes the prospect of a Grexit can feel a little lonely in Germany these days. Indignation over the Greek government is widespread and the seemingly endless rounds of debt talks have left the public drained. A Grexit seems to promise release and is looking increasingly appealing to many.

But were Greece to leave the euro, the consequences would be disastrous -- for Europe, for Greece and indeed for Germany. It wouldn't be long before we would regret the day. Far more is at stake than just a few billion euros -- which are most likely already lost, anyway.

A Grexit would mark the end to the process of European integration; the euro would be destabilized as a currency; the EU would be geopolitically undermined.

After five years of Greece topping Europe's agenda, its exit from the euro zone would amount to a monumental failure for the bloc's leaders. Greece would be condemned to hardship and cast adrift from Europe.

The euro zone might be more robust now than it was five years ago, and the fallout from a Grexit might prove less severe than predicted in 2010. But at this point, no one yet knows what exactly the consequences would be, as there is no precedent. Whether it proceeded in an orderly or a disorderly way, a Grexit would be a dramatic event. And, indeed, an expensive one, costing Germany up to €60 billion. An additional humanitarian aid effort worth billions would be required, as would debt relief.