Why Greece should leave the euro zone 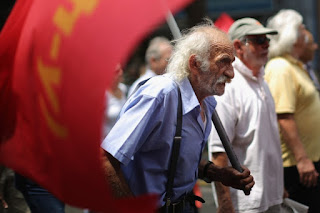 Greece and Europe have reached a deal. It is a humiliating defeat for Alexis Tsipras, Greece’s prime minister, who agreed, among other conditions, to running increasing primary budget surpluses into the future, reforming labor and product markets, reforming pensions, increasing taxes, and creating a $55 billion fund containing state-owned Greek assets that will be privatized for debt repayment, to provide banks with capital, and for investment. In exchange, Greece will receive a bailout of close to $100 billion — a massive amount equal to about 40 percent of Greek GDP. If all parties agree to this deal, Greece would stay in the euro zone.

This deal, though offering significant assistance, is a large intrusion on Greece’s sovereignty. (In fairness to the creditors, many believe that Greece cannot successfully steward that sovereignty. Especially over the last few months, the nation that brought democracy to the world centuries ago makes democracy today look like middle-school student government distracted by summer vacation.) Greece has to accept a suite of policies its citizens rejected at Tsipras’s urging in a referendum just days ago. Europe is micromanaging reforms to Greece’s labor and product markets. Outside institutions will supervise Greece’s domestic economy and an overhaul of its public administration. The $55 billion asset fund will be supervised by Europe. And Greece will have to reverse the spending measures it enacted just months ago.

A firm pledge by Europe to reduce the nominal value of Greece’s debts would have helped the medicine go down. It is unfortunate that it wasn’t included, and that only the possibility of making the debt more sustainable was left on the table.