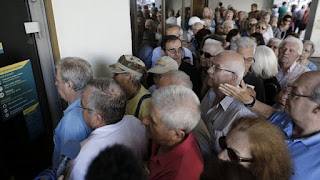 Athens will be given a final chance to present a new reform plan to eurozone leaders on Tuesday night despite a hardening attitude to Greece in many capitals after the emphatic rejection of previous bailout terms in Sunday’s referendum.

But eurozone officials said leaders were unlikely to agree to restart rescue talks to keep Greece in the currency union at a hastily convened summit in Brussels, despite the Greek overture.

The European Central Bank tightened the screw on cash-starved Greek banks on Monday evening when it required them to stump up more assets in exchange for emergency loans. It did not reveal the scale of its adjustment to the collateral rules, but expects all four of Greece’s largest banks to retain access to the loans. It kept the cap on these loans at a total of €89bn.

The ECB may have to ask eurozone leaders to guarantee Greek government debt for use as collateral to maintain its liquidity lifeline. Greece’s banks will remain shut until at least Thursday.