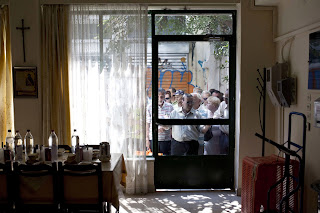 Outside Parliament here Monday night, a small crowd had gathered to protest the bailout deal that Prime Minister Alexis Tsipras was bringing home from Brussels, when a woman tried to burn the flag of his left-wing Syriza party.

She quickly found herself surrounded by other demonstrators who ripped the flag from her hands, telling her that she was going too far.

For someone who has been forced by his nation’s creditors to accept a bailout proposal that backtracks on nearly every campaign promise he made, Mr. Tsipras appears to have political support that is alive and well, even among protesters.

Analyst say he has quickly fashioned an appealing, or at least credible, narrative in the face of what most Greeks consider a negotiating disaster: The deal may be bad, but it was the best we could get and must be carried out in a way that puts average Greeks ahead of the rich, particularly the oligarchs.

Even before he left the loan negotiations in Brussels, Mr. Tsipras was striking that populist note, re-emphasizing a theme that was part of his campaign for office in January and that has surfaced in one form or another in recent years, from both the political right and left across much of Europe.