Tsipras is master of all he surveys in Greece 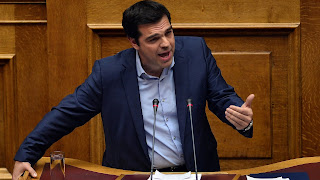 Once again, it was an agonisingly long piece of Greek parliamentary theatre. But once again, in the early hours of Thursday morning, Alexis Tsipras came out on top.

For the second time in a week, the prime minister survived a mini-rebellion in his radical leftist Syriza party and, with the help of opposition parties, passed a set of reforms required to secure a new, €86bn financial rescue from Greece’s international creditors.

There is no doubt about it, Mr Tsipras is for the time being lord and master of all he surveys on the Greek political scene. His craftiness, his tactical agility and his recent, chameleon-like changes of political colour remind me a bit of François Mitterrand, the French president from 1981 to 1995 – of which more below.

No wonder Mr Tsipras’s strategists talk openly about calling a snap election in September or October as a way of sealing his supremacy. The prime minister still enjoys broad support from the Greek public, because they admire the way he has tried – as many Greeks see it – to stand up bravely to the cold-blooded northern European-dominated creditors.