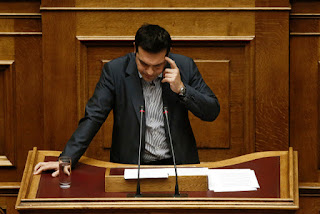 What has Alexis Tsipras achieved for the Greek people?

Monday morning, after 14 hours of talks among the euro area's finance ministers and an additional 17 hours among the group's leaders, the Greek prime minister came away with a much worse deal than the one he just persuaded Greek voters to reject. Now he must sell it to his parliament and people.

To be clear, for all the previous overheated talk of Greece's "humiliation" by the euro area countries that were bailing it out, this deal is indeed humiliating for Tsipras and Greece. The decision to set up a fund into which the country has to place 50 billion euros ($55 billion) worth of assets for privatization is the kind of thing that courts do to bankrupt companies ruled no longer competent to manage their own recovery.

The demand that Greece's parliament must, within three days, legislate for measures the government has in the past described as "criminal" and "terrorist" only underscores the degree to which Greece's economic sovereignty has been suspended.