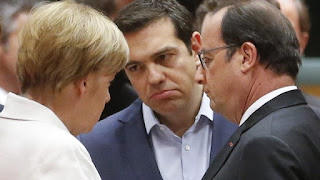 At least Alexis Tsipras avoided having to send Greece’s fairest one hundred maidens in tribute to Berlin. Apart from that, the Greek prime minister has had to concede on pretty much everything the other members of the euro demanded.

The details are still trickling out about the political agreement struck by the all-night eurozone summit, and there are a lot more decisions to be made in the coming days. But we can already draw three lessons. None is particularly edifying.

First, the decisions Europe’s busiest politicians find it appropriate to make are outright bizarre. The draft document that the eurogroup of finance ministers prepared for leaders on Sunday contains, among other things, a specific requirement to improve competition among . . . bakeries.

Perhaps the bakers of Greece need more competition. Perhaps, at a stretch, we can find some reason why this would contribute to a higher Greek growth rate. But we should gasp at the hubris of a class of European politicians who think both that their time is well spent doing this kind of micromanagement and that their preferred micro-policies are so conducive to growth they can overrule the domestic political process.