There is no Greek deal 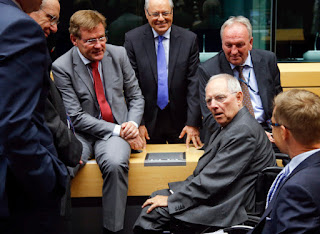 You saw the headlines Monday about a deal for Greece? Well, there is no deal. There are a series of punitive and humiliating diktats from creditors that Greece must legislate into law by Wednesday or take a “time-out” from the eurozone.

Once these creditor demands are met, then Greece will negotiate a new bailout deal. That deal will very likely certainly be a failure for both political and economic reasons. So while the immediate risk of a Grexit from the euro may be slightly lower following this weekend’s summit of European leaders in Brussels, it is materially higher in the long run.

Absent from the all-night negotiations this weekend was any real buy-in from either side of the table.

Creditors have waxed on for years about how it is necessary for Greece to assume “ownership of the program” in order for it to succeed. Never has this been more the case than now. Any deal agreed for Greece will involve a fiscal adjustment so swingeing that Greece is likely to be in recession for at least the next two years. It will be extremely difficult for the Greek people to accept such an adjustment after five years of economic depression. The medicine will be particularly bitter for Greeks to swallow given that the majority of people rejected such measures a week ago in a referendum. Wolfgang Münchau sums it up best when he asks: “Do you really think that an economic reform programme, for which a government has no political mandate, which has been explicitly rejected in a referendum, that has been forced through by sheer political blackmail, can conceivably work?”

More
Posted by Yulie Foka-Kavalieraki at 9:49 AM