The Two Kinds of Pride Before Greece’s Fall 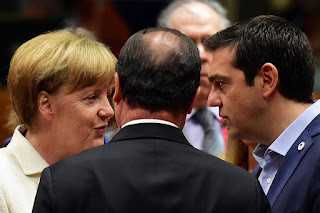 After six months of haranguing, Greece’s Prime Minister Alexis Tsipras finally got the high-level political negotiation with his country’s creditors that he said he wanted. After a brutal 17-hour marathon with other eurozone leaders this weekend, he probably wishes he hadn’t.

The terms to which Mr. Tsipras has agreed as preconditions for negotiating a third bailout amount to a total surrender. His hopes of ending austerity in his country and leading a pan-European revolt against northern fiscal hawks, especially Germany, lie in tatters. He has crossed every one of his red lines, and has committed his government to measures his conservative predecessor would never have dared consider.

Meanwhile, as a result of five months of stalled negotiations and two weeks of shut banks following his disastrous call for a referendum, an economy that was projected to hit 2.9% growth this year has plunged back into what will likely be a severe recession.