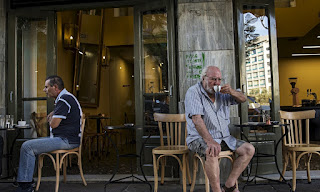 Fearful, angry, divided. This is Greece on the eve of a referendum that could define the country for generations to come. After five years at the centre of Europe’s eviscerating debt crisis, Greeks will have their rendezvous with history on Sunday – and many fear that they will live with the bitter legacy of the vote for decades.

“We have a government in panic, people being called traitors and German collaborators, and a vote of despair,” said the prominent sociologist Aliki Mouriki. “I worry that if things go wrong, if more shortages of food and medicines appear, we’ll soon be looking at a situation where primitive instincts come to the fore.”

Which way will they go? In or out of the eurozone? With polls suggesting the race is too close to call, nobody knows. What they do know – what cannot be hidden even by the eerie calm on the streets of Athens – is that in their epic struggle to remain in the single currency, this is a turning point.

The bombshell decision of the prime minister, Alexis Tsipras, to hold a plebiscite over the terms of future financial assistance for the debt-stricken nation will determine the future of Greece within Europe, a future now hanging by a thread.