The segmentary Greek society the day after the referendum 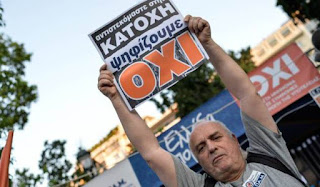 The last five years, national populism, conspiracy theories, demonization of the different, the simplified discourse and the lies have been flourished in a country in deep recession.

Ever since, the Greek society remains mildly divided. The last month, this division under the Damocles Sword of a GREXIT, became sharper. Citizens, divided to those against austerity and those in favour of Greece in the EU (“We stay in Europe” (“Menoume Evropi”) beg ginned to gather to central squares.

This division was enormously boosted by the proclamation of the referendum and the closure of banks imposing capital control in Greece. Tension in the bank queues, insulting nicknames used in and out of the Parliament, quarrels amongst unknown to each other persons in the metro or in the supermarkets, strong mistrust against the Greek Media, where some of the main characteristics of a society which likes to be divided even during good times. During bad times, divisions have led to national disasters :the 1897 30 Days War, the Minor Asia Catastrophe as result of the National Schism (Greek: Εθνικός Διχασμός, Ethnikos Dikhasmos, sometimes called The Great Division), as well as the Greek Civil War (1946-1949).

Aristides Hatzis, Associate Professor of Law Philosophy & Theory of Institutions answered our questions regarding the segmentation of the Greek society and raise of this phenomenon the last days, marked by the NO at the Greek Referendum.