The Politicians Who Warned Greece—but Were Ignored 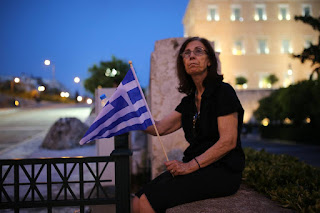 A note from Greece’s finance minister to his prime minister warned that the country needed tough economic overhauls if its economy was to live up to its European aspirations.

“We can take on the task to truly lead the country to a European direction, on condition that the Greeks—those who are living well, not those who are suffering—will make the necessary sacrifices,” the finance minister wrote.

That was in September 1996. The finance minister was Alekos Papadopoulos and the prime minister was Konstantinos Simitis, but the letter could have been written today.

In the past quarter century, Greece has had a handful of reformist politicians who foresaw the problems that are now threatening the nation with bankruptcy.

Their reform proposals were fought by their colleagues in parliament and savaged by the media and labor unions. They invariably found themselves sidelined.