The Guardian view on Greece’s no vote: eight days that shook a continent 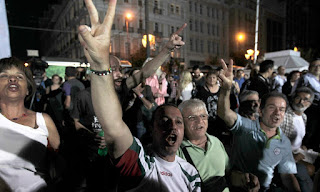 Kicking the can down the road has been the cliche of choice over a slow euro crisis that has steadily strangled the life out of the Greek economy. But at some point Europe was bound to run out of road. That happened on Sunday night, when it emerged that the Greek people had said no to continuing to engage with their creditors on the same suffocating terms.

Just over a week ago, Alexis Tsipras staked his future on forcing this denouement. The eight days that followed his midnight declaration of a plebiscite, to accept or reject the creditors’ terms for the latest slug of overdraft, have witnessed many extraordinary things. The Greek parliament licensed a hasty referendum on a question that had already been overtaken by events. A ballot paper written in jargon posed a ludicrously technical question, opening up a void for emotion to fill. Mixing talk of “terror” from their partners with haze about what would happen after a no, Mr Tsipras and his finance minister, Yanis Varoufakis, aimed squarely for the heart rather than the head. Meanwhile, Greeks faced the fiercest financial controls ever seen in modern Europe: bank doors were shut, supplies disrupted, and citizens queued at every cashpoint for their ration of notes. In countries such as Germany, where history engenders suspicion of referendums, it may have looked like a paradigm case of how not to do democracy.