The Greeks are not taking ownership of bail-out reforms 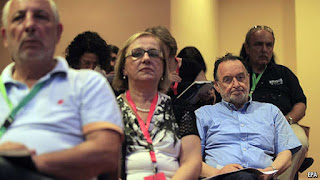 Ever since Greece and its European creditors reached a deal to keep the country from defaulting out of the euro zone in early July, two questions have loomed over Athens. The first is whether the Greeks will, or can, implement their end of an agreement that redoubles the very austerity measures the far-left Syriza government campaigned against. The second is whether trying to do so will fracture Syriza and bring down the government. Alexis Tsipras, the prime minister, prevailed over the rebellious hard-left faction in his party at a tense meeting of the Syriza’s central committee on July 30th, but the threat of a rupture remains.

The 200-member committee approved the prime minister's proposal to hold an extraordinary party congress in September. By that time, he hopes, the details of Greece's new €86 billion ($94 billion) bail-out—the country’s third—will have been agreed. But his earlier suggestion that Syriza should hold a referendum of party members immediately on whether to continue the bail-out negotiations was dropped. The key opponent was Panayotis Lafazanis (pictured at right), a former official in Greece’s Communist Party who was dumped as energy minister in a cabinet reshuffle earlier this month, and who leads Syriza’s mutinous Left Platform faction.

Holding an extraordinary congress would clear the way for Mr Tsipras to call an early election by the end of the year to consolidate his power. But it risks triggering a split with Left Platform. "The premier bought some time tonight, but that was all ," said one participant in Thursday's meeting. At one point Mr Lafazanis mocked the prime minister by comparing his referendum proposal to the national referendum held July 5th, in which most Greeks rejected a bail-out plan that had been offered by the European Commission—only to see Mr Tsipras accept a new rescue package on harsher terms a week later. "How many referenda are we going to have?” asked Mr Lafazanis. “We've already staged one and we won with 62% of the vote."