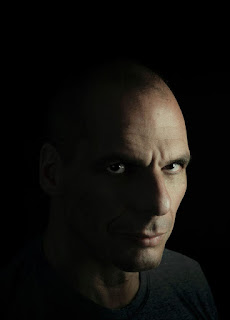 In July 4th, the night before a referendum asked the Greek people to decide how far their debt-ridden government should accommodate the demands of its main creditors—the “troika” of the European Union, the European Central Bank, and the International Monetary Fund—Yanis Varoufakis, the country’s minister of finance, sat outdoors at an Athens restaurant, wearing a T-shirt with an outline of Texas on the front. In January, Varoufakis, an economist who had been teaching at the University of Texas at Austin, abruptly entered Greek politics, becoming the public face of the country’s defiant negotiations with European leaders. After months of fatigue, he had slept for much of the day, and he was in a good mood. Varoufakis, who is fifty-four, had the peace of mind of someone who was certain of an election result and already savoring the satisfactions to follow. His government, the left-wing Syriza party, would lose. The people would vote “yes”—that is, in favor of making more concessions than Varoufakis and Alexis Tsipras, the country’s forty-year-old Prime Minister and the leader of Syriza, had said that they could stomach. Varoufakis would resign as a minister, and would never again have to endure all-day meetings in Brussels and Luxembourg, listening to other European finance ministers scold Greece for its disobedience. And he would no longer need to marshal scant supplies of discretion to disguise the fact that he and Tsipras had, in recent weeks, lost significant faith in each other. Varoufakis had not given up his hostility toward the troika, or the economic arguments underpinning that hostility, but he spoke as if Syriza’s weeklong campaign of slogans and street protests in support of ohi—“no”—were already archived in Greece’s long history of resistance to external aggressors. A “yes” vote, Varoufakis declared, was “inevitable.”

He was with his wife, Danae Stratou, an artist whose work mainly involves installations and photography, and his friend James Galbraith, an American economist who is a professor at the University of Texas. Galbraith had been acting as an unpaid adviser on an informal international team that included Jeffrey Sachs, an economist at Columbia University. According to Varoufakis, Sachs had been sending “missives for the past two weeks, saying, ‘Demand debt relief. You need it. If it’s not granted, then default.’”

More
Posted by Yulie Foka-Kavalieraki at 8:33 AM