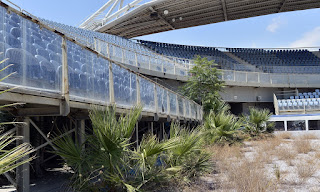 In the early days of the Greek debt crisis, two German politicians came up with a radical solution: Greece should sell off some of its uninhabited islands and property to pay back its creditors. “Sell your islands you bankrupt Greeks! And sell the Acropolis too!” was how the German tabloid Bild summed up their idea.

While selling off ancient monuments was never a serious idea, the privatisation of state assets has always been an integral feature of Greece’s international bailouts. Over the past five years, Greece has faltered on promises to sell vital parts of its infrastructure – ports, airports, marinas and waterworks – in exchange for billions of euros in loans.

Privatisation remains a vital element of Greece’s latest bailout deal. Under threat of being forced out of the eurozone, Athens agreed to transfer “valuable assets” to an independent fund, with the aim of raising €50bn (£35bn). Half the proceeds will be used to shore up capital reserves at Greek banks; a quarter will be used to repay Greece’s creditors, and the remainder will be spent on unspecified investments.