The big achievement of Tsipras’s proposal is to sow division 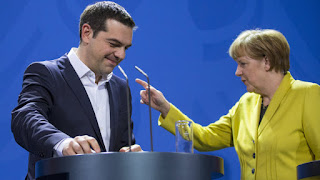 I do not have the foggiest whether these latest Greek proposals will be enough to secure a deal. There are still very big obstacles to overcome. But Alexis Tsipras has achieved something that has eluded him in the past five months: he has managed to split the creditors. The International Monetary Fund insists on debt relief. The French helped the Greek prime minister draft the proposal and were the first to support it openly. President François Hollande is siding with Mr Tsipras.

And that changes the stakes for Angela Merkel. If the German chancellor says no now, she will stand accused of taking reckless risks with the eurozone and the Franco-German alliance. If she says yes, her own party might divide similarly to the way the British Conservatives divided over Europe. I have always predicted that the moment of truth for the eurozone will come eventually. It will come this weekend.

The financial markets seemed to have made up their mind that a deal will happen. But beware the many landmines on the path to a deal. Of those, only the first has been sidestepped with Mr Tsipras’s offer. What he is now proposing is, economically, not fundamentally different from what he, and the Greek electorate, rejected in Sunday’s referendum — but it works politically for him. The phase-in period of some of the harder measures is longer. And if there is a deal, there will have to be an explicit reference to debt relief this time. The IMF insists on it. And even Donald Tusk, the president of the European Council, says so. This is an important development, but it is not clear that all creditors will, or can, agree.