Personal Grexits: Should I stay or should I go now? 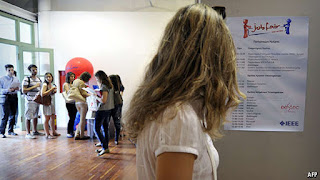 Nicos, a surgeon in a regional hospital in Greece, is struggling with a painful decision. As Grexit has moved from a hypothetical scenario to an imminent threat, he and his wife have been staying up late into the night to mull over what they should do. “I don’t think we could stay,” says the father of two, who recently moved back to Greece after completing his medical training in Britain. He had hoped that his country was going to recover and wanted his children to grow up there. But recent months have been tough, with basic and medical supplies running low, as well job cuts. He is certain things will only get worse if Greece leaves the euro.

All over the country, similar conversations are going on around the kitchen tables of doctors, lawyers, entrepreneurs, engineers and other professionals. Indeed, over the past five years (see chart) there has been an exodus of young, talented, highly-skilled Greeks to the shores of Britain, Germany, America and other rich countries. Around 180,000 Greek professionals (around 12% of people with graduate degrees) currently work abroad and many more study overseas. Some 130,000 Greeks graduates have left the country since the financial crisis, according to Lois Labrianidis, an academic who specialises in Greece’s braindrain.

The main reason has been a lack of knowledge-based jobs in Greece for the highly skilled. One of Greece’s hidden assets is its scientists: the country punches well above its weight globally. Some 3% of top scientists hail from Greece, which only accounts for 0.2% of the world’s population. But 85% of these research superstars live and work abroad, constituting a brain drain greater than that in any other euro-zone country.