Offer by the Greeks should not be refused 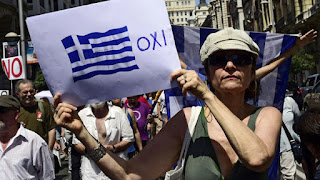 According to a glimpse of his notes, Euclid Tsakalotos was nervous lest his bearing towards fellow eurozone finance ministers was too triumphalist. He had no reason to worry. The first significant act of Greece’s new finance minister was a near capitulation to its creditors, in a last-ditch effort to end a flirtation with exit from the euro.

This sudden love of compromise warrants a dose of incredulity. Less than a week has passed since the Greeks voted overwhelmingly to reject an offer that prime minister Alexis Tsipras had decried as blackmail. On Thursday, the economy sliding into depression and its banks in slow-motion collapse, he returned to the negotiating table with an offer that is even harsher. As Mr Tsipras tramples over his own red lines, his creditors may wonder whether any of this is serious.

A fair objection; given the fandango of bluster, bluff and retreat of the past five months, it is hard to discern a consistent principle behind Mr Tsipras’s actions. Nevertheless, when the eurozone’s finance ministers meet on Saturday to consider their response, they should swiftly sign on the dotted line.