Love and hate between Greece and the west 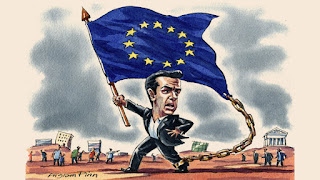 In 2010, the year of their nation’s first €110bn international rescue, plenty of Greeks understood that the state and citizenry had lived for decades beyond their means. The medicine of austerity and economic reform would be bitter, but it had to be swallowed. The paramount need, as for earlier generations of Greeks, was to stay on the path of modernisation and a European identity.

As I am discovering in Athens, the mood today is different. Exhaustion and despair have replaced self-criticism. There is much resentment that five years of medicine seem to have brought little except mass unemployment, failing businesses, a withered welfare state and national humiliation.

Yet the desire for a modern Greece, claiming its rightful place in Europe, is much the same now as in 2010. This explains the apparent paradox that Greeks voted in a July 5 referendum against bailout conditions intended to keep the country in the eurozone, yet state in opinion surveys that they want to stay in Europe’s currency union. Even 66 per cent of Syriza voters are pro-euro.