IMF signals it could walk away from Greek bailout deal 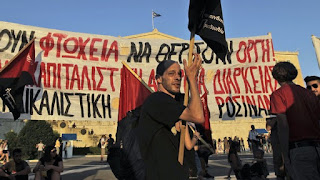 The International Monetary Fund has sent its strongest signal that it may walk away from Greece’s new bailout programme, arguing in a confidential analysis that the country’s debt is skyrocketing and budget surplus targets set by Athens cannot be achieved.

In the three-page memo, sent to EU authorities at the weekend and obtained by the Financial Times, the IMF said the recent turmoil in the Greek economy would lead debt to peak at close to 200 per cent of economic output over the next two years. At the start of the eurozone crisis, Athens’ debt stood at 127 per cent.

The memo argues that only through large-scale debt relief — something eurozone officials have fiercely resisted — could Greece see its debt fall to levels where it would be able to return to the financial markets.

“Greece’s debt can now only be made sustainable through debt relief measures that go far beyond what Europe has been willing to consider so far,” the memo reads.