How Can Greece Take Charge? 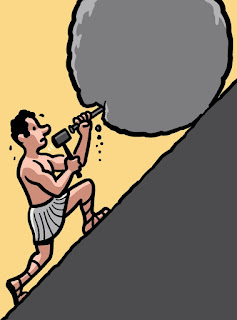 If there’s one message that Greece should take away from its recent confrontation with the euro zone, it’s that it will never get the help it really needs. Assuming that the deal goes through, Greece should be able to reopen the banks and keep the economy from total collapse. But, with that economy having shrunk by a quarter in five years and an unemployment rate over twenty-five per cent, it needs real stimulus spending and a much looser monetary policy. Neither is on offer. Even if Greece gets the debt relief that the I.M.F. is recommending, the next few years will be grim. As James Galbraith, an economist at the University of Texas at Austin, who assisted the former Greek finance minister during this year’s negotiations, told me, “What’s going to happen in Greece is going to be very sad.”

So what can Greece do? It really has only one option—to make the economy more productive and, above all, to export more. It’s easy to focus on Greece’s huge pile of debt, but, according to Yannis Ioannides, an economist at Tufts University, “debt is ultimately the lesser problem. Productivity and the lack of competitive exports are the much more important ones.”

There are structural issues that make this challenging. Greece is never going to be a manufacturing powerhouse: almost half of all Greek manufacturers have fewer than fifty employees, which limits productivity and efficiency, since they don’t enjoy economies of scale. Greece also has a legal and business environment that discourages investment, particularly from abroad. Contractual disputes take more than twice as long to resolve as in the average E.U. country. Greece has been among the most difficult European countries in which to start and run a business, and it has myriad regulations designed to protect existing players from competition. All countries have rules like this, but Greece is an extreme case. Bakeries, for instance, can sell bread only in a few standardized weights. Recently, Alexis Tsipras, the Greek Prime Minister, had to promise that he would “liberalize the market for gyms.”