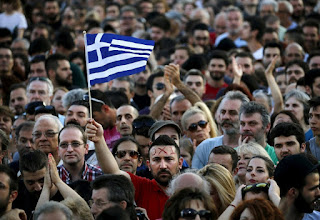 Greece’s economy and society have been through the wringer over the past six years. Following the rise of Tsipras and his Syriza party to power in the January 2015 elections, there was widespread hope for better days to come for both Greece and Europe. Yet, as we speak, the country is finding itself in a state of economic turmoil and social unrest caused by capital controls and the closing of banks following the announcement of a referendum last Friday.

According to the conventional reading of events, the Greek government made a series of blunders and excessively risky gambles in its effort to play tough in its protracted negotiations with the country’s creditors over the bailout program and debt relief. But if one takes a hard view of how the events of the negotiations unfolded (using Greek FM Yanis Varoufakis’ beloved game theory), then it is become increasingly clear that Tsipras’s true aim had never been a better deal, but Grexit itself.

Let us first take a look at the facts and then try to determine whether the conventional view or the more radical one have more purchase. In January 2015, Syriza wins the snap elections (caused by the previous government’s inability to garner 180 votes in a 300-seat parliament in order to get a figurehead Head of State elected) with 36.3 percent vote share, mainly by promising to put an end to austerity while keeping the country within the euro.