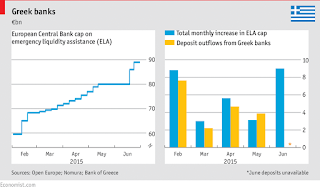 Yesterday's decisive "No" vote in Greece's referendum, on whether the country should accept its European creditors' conditions for a new bail-out deal, was met with scenes of jubilation in Syntagma Square outside the country's parliament in Athens. Alexis Tsipras, Greece's radical left-wing prime minister, will count the result as a victory after promising voters that a "No" vote would enable him to demand a better deal from the country's lenders.

Yet Greece's future remains as bleakly uncertain as ever. The banks remain closed more than a full week after Mr Tsipras—on the announcement of the referendum—was forced to close down the financial sector and impose capital controls to avert a potentially disastrous bank run. As voters went to the polls, many cash machines in central Athens had run out of money, even though depositors are only allowed to withdraw €60 ($67) a day.