Grexit debate down but not out, Argentina lessons remain 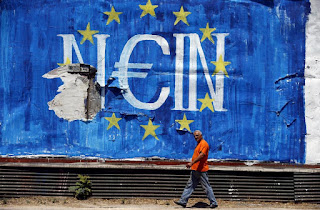 Greece just narrowly avoided crashing out of the euro but for sceptics the clock is already ticking on when large-scale default and exit from the "irreversible" euro club are raised once again.

When it is - be that in two months or two years - the lessons from Argentina are sure to be revisited.

Argentina's $100 billion (64 billion pounds) default in 2001 was the largest in history. It yanked the peso from its peg to the dollar and resulted in a 75 percent devaluation.

This shattered the economy. Real gross domestic product slumped 15 percent, inflation reached 40 percent, and household and business finances were crippled. To this day, the government remains cut off from international capital markets.

But, with the aid of serendipitous global economic conditions, Argentina's economy soon recovered.

More
Posted by Yulie Foka-Kavalieraki at 9:01 AM