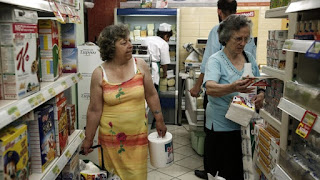 You know that these are extraordinary times in Greece when people are rushing to pay their taxes. And buy ovens.

In the past two weeks, fear has gripped Greeks with savings in their bank accounts. With the introduction of capital controls and the imminent prospect of Grexit, locals have decided that it makes more sense to spend their money before its value is eroded by any financial shock.

This weekend’s EU summit is seen as a make or break moment, determining whether the country can remain in the euro, which it joined in 2001.

Worrying about the enormity of the stakes, many Greeks have resolved to clear their obligations with the revenue service — a paradox in a country frequently lambasted in northern Europe for tax evasion.

Antonis Mouzakis, a corporate tax adviser, said he had been overwhelmed by businesses that wanted to complete early tax filings this year.

“There is huge concern because of the danger of the bail-in and bank closures. So if someone has money in their bank account, they choose to get rid of it and pay upfront immediately . . . they have to pay in the end, anyway.”