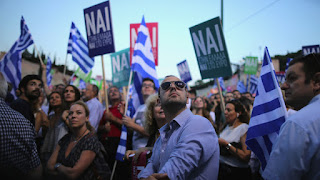 Last week Jean-Claude Juncker called on Greeks not to “commit suicide because you are afraid of death”. He was dramatising, of course: there would be life after a Greek exit, if it comes to that in the end — although for some years it might be a hard one.

But he touched on a poignant truth that should not be forgotten in the aftermath of Sunday’s referendum. The Greeks do not want to end their lives, metaphorically speaking. But there are many who have given up hope of improving them.

I know people who voted No on Sunday. Some bought into the idealistic dreams of national sovereignty; others were furious with the way their country has been treated by its lenders. But those I feel for most are the friends and relatives who voted for a possible euro exit because they felt exhausted and abandoned by their own leaders, as well as European decision makers.

A friend of mine worked in three different jobs last year and received no money from any of her employers. She is not alone; an estimated 1m employed Greeks endure long stretches without being paid, sometimes as many as five months at a time.