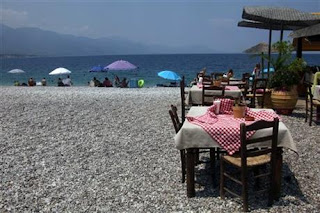 An hour west of Athens, the pebbly beaches by turquoise waters and pine-covered mountains are nearly empty as the Greek sunbathers who normally pack them stay home amid fears their country's economy could implode.

Only a few dozen people sit down for a fresh grilled seafood lunch at the beachside restaurant Mary Cromba has owned for 15 years in the tiny village of Psatha. That's down from the hundreds she served most days last year in July.

Now beachgoers on day trips from the capital find parking spaces easily and haul their own food in coolers.

"Last year the beach was packed with people, from the sea to the parking lot," Cromba said, her eyes welling. "This year I had to let three employees go."

The consumer paranoia keeping customers away, however, is overshadowed by a Greek government crisis solution that Cromba said could eventually kill her business and many others that depend on domestic Greek tourism. Sharply higher sales taxes are coming, part of the governing Syriza party's promises to the 19-nation eurozone in return for a third multi-billion euro (dollar) bailout.