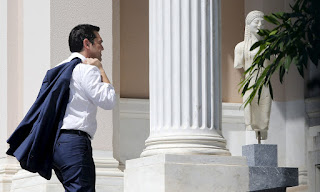 For the Greek prime minister, Alexis Tsipras, the hard work begins now. The rescue deal hammered out in Brussels may have brought relief to Athens but its battle-hardened government knows that it also comes at enormous cost.

Within minutes of Tsipras giving his “victory” speech, some in his Syriza party were denouncing the bailout accord – the third emergency funding programme for the debt-stricken country since 2010 – as the harbinger of further catastrophe.

“After 17 hours of ‘negotiations’ the leaders of eurozone member states reached an agreement that was humiliating for Greece and the Greek people,” declared the dissenters, coalesced around the energy minister Panagiotis Lafazanis.

Political tumult beckons. Tsipras returns to Athens with a deal so excoriating that not even his closest allies on Monday appeared willing to defend it.

“Europe is punishing us … we can’t make this agreement seem better than it is,” snapped the labour minister, Panos Skourletis, predicting that fresh elections would almost certainly have to be held later this year.