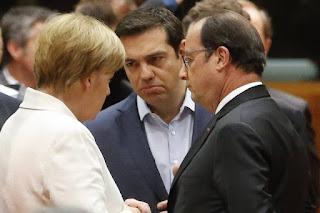 Europe’s ultimatum to Greece, demanding full capitulation as the price of any new bailout, marks the failure of a rebellion by a small, debt-ridden country against its lenders’ austerity policies, after Germany flexed its muscles and offered Athens a choice between obeisance or destruction.

Sunday’s statement on Greece by eurozone finance ministers will go down as one of the most brutal diplomatic démarches in the history of the European Union, a bloc built to foster peace and harmony that is now publicly threatening one of its own with ruination unless it surrenders.

The weekend’s power play also highlights the cracks among Greece’s creditors—especially Germany and the International Monetary Fund—as the cost of keeping Greece in the euro spirals out of control. The IMF has urged Europe to give Greece some debt relief, something Berlin has opposed. Part of the reason for Germany’s hard line now is that maximally tough austerity in Greece could reduce IMF pressure to write off Greek loans. 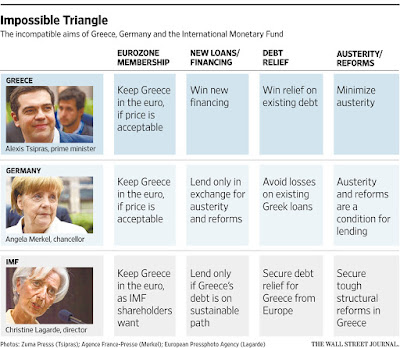 Posted by Yulie Foka-Kavalieraki at 5:32 AM