When Greek Banks Reopen, Will All the Money Be There? 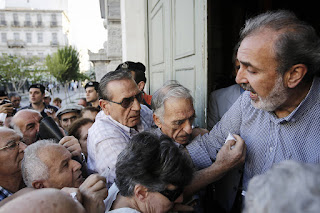 Greek banks have been shut all week, putting a tight squeeze on the country’s economy. They’ll remain closed at least through Greece’s referendum on Sunday, but pressure will be fierce to reopen them as soon as possible after. Here’s a look at how that might—or might not— happen and at the question foremost in many Greeks’ minds: When the banks do reopen, will they still have their deposits?

Q: Why are the banks closed?

A: They have almost no cash. As of the end of May, the latest official data, they had about €2 billion ($2.2 billion). People familiar with the system estimate the figure is now below €1 billion. They also have no new access to the emergency central-bank line that had been giving them cash — the European Central Bank froze that Sunday.

They simply can’t give withdrawing depositors all the cash they want. They owe Greek customers with deposit accounts €139 billion, as of May. Thus the restrictions that limit ATM withdrawals to €60 per day and forbid electronic transfers outside Greece.