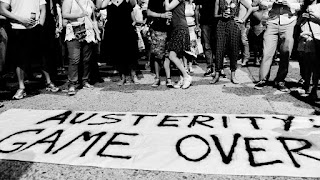 It is easy to see Greece as a clash between “austerity” and “progressive economics,” with the Germans (and Finns and Dutch, alongside various international public servants and economists) on one side, and Keynesians and progressives on the other as Paul Krugman’s recent CNN interview suggests. This has certainly been the picture painted by Syriza, the left-wing political party of Greek Prime Minister Alexis Tsipras, and by many friends of Greece and progressive economists.

The reality, though, is more complicated. To be sure, excessive austerity is bad macroeconomic policy. But the issue at stake isn’t just austerity. The issue is that Greek “resistance”—not just Syriza’s, but also that of the previous government—takes the form of protecting rent-seekers. This is where the July 2012 memorandum of understanding between Greece and the Troika (the International Monetary Fund, European Central Bank, and the European Commission) failed miserably; the previous government, much like Syriza, wanted to preserve the status quo.

Greece’s main economic problem is structural and an exit from the Eurozone will not solve it. Besides the short-term costs of such a move, history shows us that Greece has never managed to benefit from currency devaluations. What’s more, the recent McKinsey study on Greek competitiveness shows that the country’s biggest challenge has been a lack of investment.