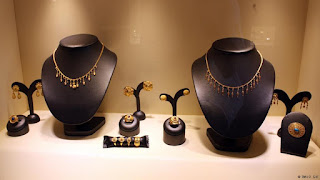 The economic rollercoaster that Greece has been riding in the last few months has thrown out some unusual patterns. As the country's referendum was called, quickly followed by capital controls that have seen Greek banks close for business, many Greeks who didn't move their finances out of their bank accounts in time went on an unprecedented spending spree.

Greeks are currently restricted to a daily cash withdrawal limit of 60 euros ($65). This limit however doesn't apply to purchases with credit or debit cards, and Greeks have been exploiting that. Scared that the capital controls would get worse and they would lose their savings, Greeks went shopping for TVs, cars, jewelry, smartphones and electronic goods to the point that Dixons Carphone, the parent company of the Greek electronics brand Kotsovolos, reported that sales of big ticket items like large screen TVs in the Greek market had helped boost their profits to May by 21 percent compared to last year.

Zolotas, the jewelry brand made famous by Jackie Onassis and Elizabeth Taylor, recently had a customer try to buy one millions euros worth of jewelry at their flagship central Athens store. They turned him down, preferring to hold on to the stock.