Greece’s eurozone future in doubt after decisive No victory 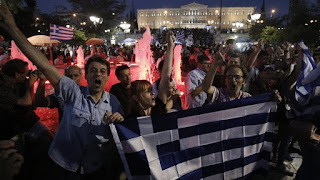 Greece’s anti-austerity government scored a decisive victory in Sunday’s referendum as voters backed its call to reject a compromise with international creditors, raising serious doubts about the country’s ability to remain inside the eurozone.

The No camp won 61.3 per cent of the vote and was victorious in every region of the country, a remarkable political exploit by Greek Prime Minister Alexis Tsipras. But the result is likely to plunge Greece deeper into turmoil as it tries to prevent the collapse of a financial system that is rapidly running out of cash.

Mr Tsipras said he was ready to resume talks immediately, “but this time the issue of debt will be on the negotiating table”.

“The mandate you’ve given me does not call for a break with Europe, but rather gives me greater negotiating strength,” Mr Tsipras said in a victory speech, sounding a little more concilatory towards his eurozone partners than in recent weeks.

More
Posted by Yulie Foka-Kavalieraki at 3:29 AM