Greece will struggle to stay in euro 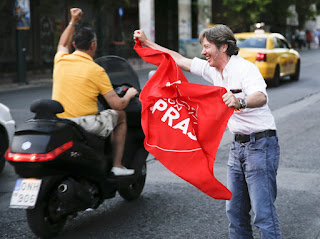 The question Greeks answered on Sunday’s referendum ballot paper didn’t mention the euro. But after the people gave an emphatic “No” to proposals from the country’s creditors, Greece will struggle to stay in the single currency. Even if it does, all routes will bring economic hardship and social tension.

The first way of avoiding a reversion to Greece’s pre-euro currency would be if euro zone partners and the International Monetary Fund cut Alexis Tsipras a significantly better deal than they were offering 10 days ago. This is what the radical left prime minister said would result from a “No” vote. The government even promised to do a deal within 48 hours.

But the creditors probably won’t buckle. They would prefer to keep Greece in the euro if possible – for both financial and geopolitical reasons. But many of the leaders are fed up with Athens’ rhetoric and negotiating style. The day before the referendum, for example, Finance Minister Yanis Varoufakis accused them of terrorism. Parliamentarians and electorates in some countries, such as Germany, are hostile to the idea of granting more soft loans to Greece.