Greece signs up to a painful, humiliating agreement with Europe 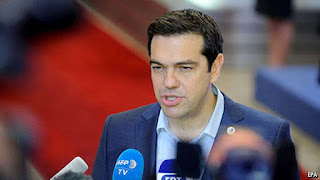 At one point during marathon euro-zone talks in Brussels on the evening of July 12th, Alexis Tsipras was a few minutes late returning from a break. A rumour took flight: the Greek prime minister, facing brutal demands from his 18 fellow euro-zone leaders in exchange for an agreement to begin talks on a new bail-out, had fled the building. It turned out that he was in the bathroom.

That it seemed plausible for Mr Tsipras to have pulled a personal Grexit sheds light on the extraordinary pressure the prime minister faced during the all-night talks. At 6am, locked in discussions over a controversial privatisation fund with Angela Merkel, Germany’s chancellor, and François Hollande, the French president, Mr Tsipras did indeed come close to walking out. But spurred by pressure from Donald Tusk, the chair of the summit, the three eventually managed to forge a deal that could form the basis of a multi-billion-euro bail-out, Greece’s third in five years.

In exchange for the package, which could amount to as much as €86 billion ($95 billion) over three years, Mr Tsipras has had to sign up to precisely the sort of demands his Syriza party railed against during its successful election campaign in January. The proposals in a compromise deal offered by Mr Tsipras the previous week, most of which were overwhelmingly rejected by Greek voters in a referendum a few days earlier, mark just the beginning of the new deal. Those pledges, on matters like VAT and pension reform, must be legislated by the Greek parliament no later than July 15th. A week later further legislation must follow, including a total overhaul of Greece’s judicial system.