Greece Should Vote Yes and Europe Should Be Ashamed 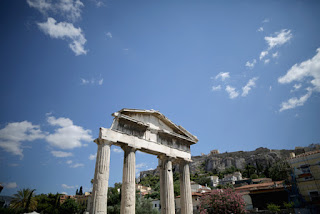 If I had a vote in Sunday's referendum in Greece, which way would I cast it? With a heavy heart, I'd vote yes.

Greeks are being asked whether to support the terms for further financial assistance offered to their government a little over a week ago by the European Union and the International Monetary Fund. Prime Minister Alexis Tsipras is calling on them to say no. He promises that if they do, he can get them a better deal in short order.

Recent polls say the vote could be close. I'm not convinced it will make much difference. Whether Greece votes yes or no, Tsipras (though apparently not his finance minister) is aiming to stay in charge. The vote doesn’t change the calculations that the respective sides will have to make about long-term consequences. It will still be in both sides' interests to come to an agreement. For five months, that hasn't been enough -- but at some point, even now, sanity may prevail.