Greece: A Glimmer of Hope For Both Sides 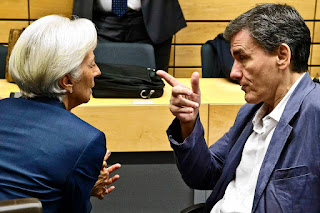 Two questions have been at the heart of the Greek crisis from the start: is the eurozone to be a currency union governed by rules? And is Greece willing and able to reform its economy to cope with the rigors of eurozone membership?

Greece’s leftist government has spent six months trying to tear up the eurozone rulebook with its demands for cash without conditions, while at the same time resisting pressure to reform its dysfunctional state. But following Athens’s near-total capitulation during a weekend of marathon negotiations in Brussels, it is possible the answer to both questions may turn out to be “yes”, in which case Greece and the eurozone may yet avoid disaster.

Sure, the conditions that Athens has had to accept to unlock this deal are demanding, far tougher than anything being demanded of Greece before the original negotiations broke down two weeks ago, let alone when it took office in January.

Even to start talks on a new bailout program, Athens must pass a series of reforms in the Greek parliament that it has been resisting for six months, including changes to the tax and pension system. It must transfer state-owned assets to an investment fund for future privatization over which it won’t have full control. And it must accept detailed product and labor market reforms and overturn recent measures taken unilaterally without the agreement of its creditors.