Greece Faces Showdown With Creditors as Lawmakers Back Deal 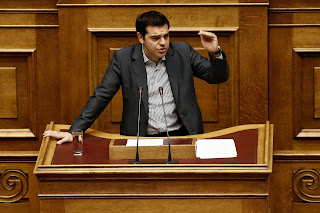 Alexis Tsipras’s government is heading into a weekend of political wrangling in Brussels after winning the backing of Greek lawmakers to negotiate a deal that will keep the country in the euro.

Greece’s prime minister won overwhelming support for the package of spending cuts, pension savings and tax increases with a majority of 251 votes in the 300-seat parliament after securing backing from opposition parties. Germany has already indicated a new proposal would have to incude tougher conditions.

While the vote result provides evidence that the government commands broad support to negotiate a deal, it came at a cost for Tsipras. More than a dozen members of his Syriza party refused to back the plan with some of them denouncing the harsh austerity measures it prescribes less than a week after Tsipras won an anti-austerity referendum. The prime minister said after the vote that his priority would be to complete negotiations with the creditors on a bailout deal.

“The national assembly has given the government today a strong mandate to complete the negotiation and to achieve an economically viable and socially just agreement with our partners,” Tsipras said in a statement.

More
Posted by Yulie Foka-Kavalieraki at 4:03 AM