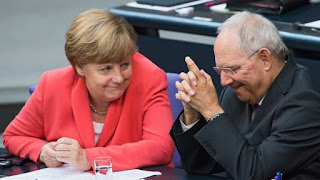 When Michel Sapin boarded the 10:25 high-speed train from Paris to Brussels last Saturday morning, the French finance minister thought a deal to prevent Greece from crashing out of the eurozone was at hand.

The troika of Greek bailout monitors had given their assent to a reform proposal submitted by Alexis Tsipras, the Greek prime minister. More importantly, German chancellor Angela Merkel had that morning reassured Mr Sapin’s boss President François Hollande that she would not allow “Grexit”.

So when Mr Sapin arrived in Brussels at midday, he received a shock: Wolfgang Schäuble, the German finance minister, was armed with a one-page paper advocating a Greek “timeout from the eurozone” for “at least the next five years” if Athens did not accept the bloc’s exacting conditions for a new bailout.

Even more surprisingly, the temporary Grexit plan appeared to have the backing of Ms Merkel, senior EU officials said. The chancellor had long been seen in Brussels as the good cop to Mr Schäuble’s bad cop. No longer. Ms Merkel told the Bundestag on Friday she viewed a voluntary, organised Grexit as a viable option.

“We knew Germany could go far to exert pressure on Greece, but maybe not this far,” Mr Sapin told the Financial Times. “My trust was shaken.”