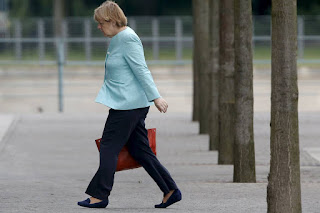 Germany stood firm against debt relief for Greece the day after the country’s voters issued a resounding “no” to more austerity, signaling a possible tough fight ahead on one of the few remaining opportunities for compromise.

About 61% of Greek voters strongly backed Prime Minister Alexis Tsipras’s stance against the pension cuts and tax increases that creditors—the rest of the eurozone and the International Monetary Fund—say are necessary to get Greece’s economy going again.

That leaves cutting debt as a central subject. German Chancellor Angela Merkel and French President François Hollande, whose country has emerged as one of the few friendly voices for Greece in the eurozone, were to discuss the issue in Paris on Monday evening, and it will be a major theme at a summit of eurozone leaders on Tuesday.

Finding a solution to Greece’s financial troubles is urgent if Europe wants to keep its currency union intact. The eurozone portion of Greece’s €245 billion bailout has expired, and a default on a €1.56 billion payment to the IMF last week means Athens isn’t eligible for any more loans from the fund. A crucial €3.5 billion bond repayment to the European Central Bank is already due on July 20.