Germany Has a Lot to Lose in a Greek Euro Exit 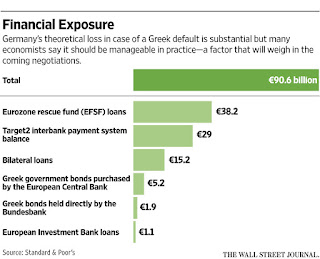 When Chancellor Angela Merkel joins her fellow European leaders in Brussels on Tuesday for talks that will decide whether Greece can keep the euro, the cost of failure will be at the back of her mind.

Should the talks collapse and Greece stumble out of the eurozone, every member state stands to lose the loans extended as part of Greece’s past bailouts—a factor that could help sway the negotiations one way or another.

Yet, while many countries might see the price of failure as an incentive to seek an amicable deal, Germany, which has taken the lead in shaping Europe’s answer to the eurozone crisis for the past five years, faces a less clear-cut calculation.

The German government hasn’t published estimates of how much it could lose in case of a default, arguing that this scenario could unfold in too many different ways. Based on available data, however, the Munich-based Ifo economic institute puts total German exposure to Greece, including the loans and a host of other liabilities, at €88 billion ($97 billion), while rating agency Standard & Poor’s estimates it at €90.6 billion.