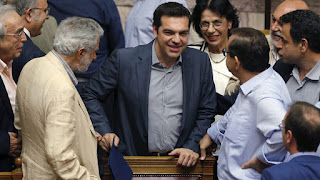 Eurozone finance ministers will decide on Saturday whether to keep Greece’s prospects of staying in the eurozone alive, after lawmakers in the cash-strapped country voted in the early hours to back the government’s proposals in connection with a bid for a multibillion-euro bailout.

Greek prime minister Alexis Tsipras saw off a threat from rebels in his ruling coalition and overwhelmingly won the parliamentary vote in Athens on his reform plan. Earlier, Greek media reported that Left Platform, the hard left in Mr Tsipras’s Syriza party, were going to vote for the plan.

In a statement after the vote, which the government won with the help of pro-European opposition parties, Mr Tsipras said he had a “strong mandate to complete the negotiations to reach an economically viable and socially fair agreement”. A total of 251 MPs backed the plan, with 32 against.

MPs in Athens had heartened investors with the new economic reform proposal that conceded to the country’s bailout creditors on several fronts.

More
Posted by Yulie Foka-Kavalieraki at 4:44 AM