Alexis Tsipras reshuffles cabinet to get rid of bailout dissidents 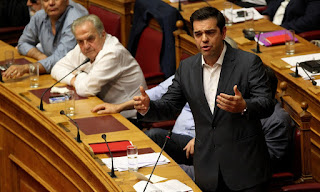 The Greek prime minister has sought to rid his government of hardline leftists who oppose further austerity, reshuffling his cabinet barely 48 hours after dissidents broke ranks over a draconian bailout deal for the debt-stricken country.

In a move aimed squarely at displaying his determination to forge ahead with spending cuts and reforms, Alexis Tsipras replaced leading government ministers. The shakeup marked a decisive split from militants in his radical left Syriza party who had voted against tough measures demanded in return for rescue funds from the EU and IMF.

“It marks the beginning of the end of his relationship with the extremist far-left faction,” said Aristides Hatzis, associate professor of law and economics at Athens University. “But it is also clear that this is a short-term government. Tsipras’s hands are tied because these people still have a strong presence in his parliamentary group.”

The reshuffle saw nine changes overall, with the ousting of energy minister Panagiotis Lafazanis by far the most important. As head of Syriza’s militant Left Platform, the veteran Marxist had led the revolt against policies he said were utterly incompatible with the party’s ideology. Lafazanis was replaced by former labour minister Panos Skourletis.

More
Posted by Yulie Foka-Kavalieraki at 8:47 AM