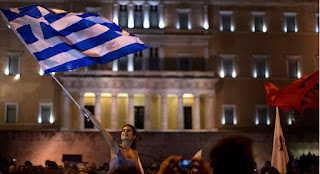 “We were like junkies, begging for the next fix. He is putting a stop to that. That’s why we support him—and we will support him all the way,” said an unemployed 30-year-old Greek teacher, adamant in his backing of Alexis Tsipras, Greece’s embattled prime minister. It was a widely shared sentiment among voters I spoke to on Sunday, the date of Greece’s historic referendum.

Sunday’s vote was a personal triumph for Tsipras. Greece’s voters, in a desperate cry against further austerity, delivered a dramatic verdict against the measures proposed by Greece’s creditors, precisely the line that the prime minister had urged them to take. His decision to resist a deal and take the question to the people has proved a political masterstroke in the domestic arena—while at the same time making an agreement significantly harder to reach.

Both before the vote and in their first reaction after, the vast majority of comments from analysts and European leaders converged on the same conclusion: that a “no” vote made it very likely that Greece would have to quit the Eurozone and revert to a national currency, with all the hardship and the chaos that would entail. Tsipras begged to differ, arguing that such a vote would only strengthen Greece’s negotiating position in its quest for an ever-elusive deal with Europe and the IMF. It remains to be seen who was right.