Why Everybody’s in the Dark on Greece 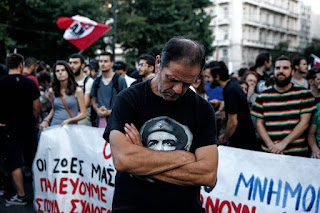 Does Alexis Tsipras actually want to keep Greece in the eurozone?

Until recently, the answer seemed clear. The Greek prime minister fought an election promising to keep Greece in the single currency. Every survey of Greek voters showed strong support for euro membership. No one seriously doubts that a euro exit would be catastrophic for the Greek economy in the short term—and most likely in the long term too, given the potential for social and political turmoil. Sure, his Syriza party has been anti-euro as recently as 2012 and some of its leading figures have continued to argue for exit, but the bulk of the party seemed to have reconciled itself to membership.

Eurozone policy makers certainly always assumed that Mr. Tsipras was negotiating in good faith. They believed this even as he campaigned on a platform of tearing up the terms of the country’s bailout deal and reversing many of the key reforms; they continued to believe it even when he shunned the possibility of coalition with the centrist pro-euro To Potami party in favour of an alliance with the right-wing nationalist euro-skeptic Independent Greeks. They even kept their faith after he was elected when he provocatively began to follow through on campaign pledges to hire back sacked civil servants, cancel privatizations and make unfunded fiscal handouts.