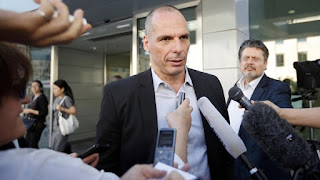 Yanis Varoufakis, Greece’s finance minister, said he does not expect to reach a deal to resolve his country’s five-month stand-off with bailout creditors when eurozone finance ministers hold a crunch meeting on Thursday.

Unless Greece agrees economic reforms with its creditors by the weekend, officials believe time will run out for Athens to receive a desperately needed €7.2bn remaining in its bailout programme before it expires in two weeks.

Without the funds, the government will probably default on its debts, a move that the country’s central bank has warned would trigger a “painful course” leading to exit from the eurozone and “most likely” from the EU.

Michel Sapin, France’s finance minister, said on Thursday it would be a “total catastrophe for Greece” if it leaves the single currency.

“We will fight till the end to find an agreement with Greece,” he said on France Info radio.

When asked by reporters in Paris whether ministers would reach a deal, Mr Varoufakis said on Wednesday: “I do not believe so.”

More
Posted by Yulie Foka-Kavalieraki at 9:52 AM