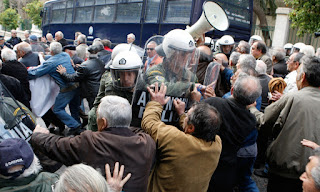 Pensions are a significant sticking point in the standoff between Greece and the IMF, the European commission and the ECB.

Greece’s creditors demand that Athens should cut pensions further. But the Greek government says it has gone as far as it can go.

The previous government cut pensions (although a court has recently ruled that measures carried out in 2012 were unconstitutional), became better at identifying bogus claims and collecting debt, and had passed legislation to reduce supplementary pensions by preventing the state from subsidising such payments.

There has been some progress on pensions under the leftwing government of Alexis Tsipras, however. The current administration has pledged to continue to integrate pension funds (in 2008, Greece had more than 100 separately administered funds), to phase out some early retirements and progressively reduce higher pensions. It has also promised to halt legal oddities, including those loopholes enabled by job categories entitled to retire early due to “hazardous working conditions”, meant for sectors such as bomb disposal, yet also covered radio and television presenters (at risk from the bacteria on their microphones), musicians playing wind instruments and hairdressers.